The official blessing for the H and J piers at Tauranga Marina was carried out on Friday. Photo/Jordan Boyd.

The opening of two new piers at Sulphur Point Marina marked the beginning of a complete upgrade to the marina’s original docks.

The new H and J piers were officially blessed at a ceremony involving members of the Tauranga Marina Society, along with the wider community, on Friday.

About 25 people turned up for the event where a Tauranga Kaumatua blessed the recently finished sites.

The piers were also constructed with two new gateways, with the design and artwork carried out by Whare Thompson, a master carver of Ngati Whatua and Ngapuhi who has been involved with a number of works in Tauranga.

In 2019, Tauranga City Council had a report carried out regarding the life of the wooden floating docks that were originally constructed in 1982.

When first built, the docks were deemed to last 40 years, however, the report found that they were in worse condition than originally thought and that they would need to be replaced.

Tauranga Marina Greg Prescott says the maintenance fund held within the society was not going to cover the about $16m needed for the build, so they turned to the members of the H and J piers for contribution.

“To decide what we were going to build, we selected three people from across the marina and looked at four different building options. The best option we saw was Poralu, so we went to Australia to see some of those, were very impressed and decided to go with that company.

“We also decided to widen the docks to allow for bigger boats because everyone wants to go bigger. Our friends here on their motorbikes, they don’t ride Suzuki 250’s anymore they all want a 750 Harley Davidson.” 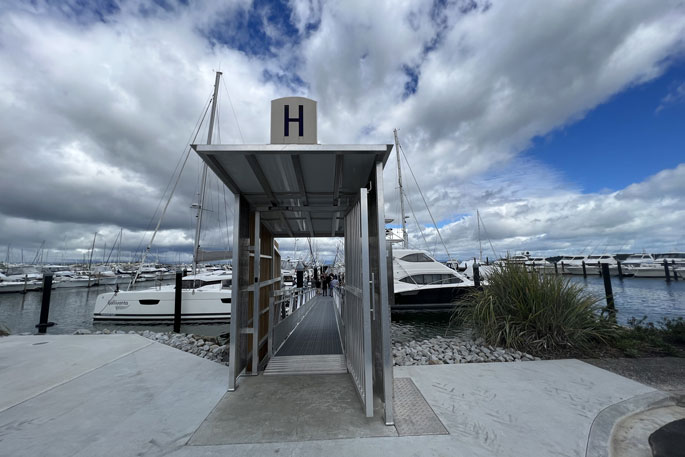 The artwork on the new piers was carried out by master carver Whare Thompson. Photo/Jordan Boyd.

The new docks are modern, maintenance free, and the society is expecting a 40-50 year life with very little maintenance costs.

Tauranga Marina Society chairman Eric Tate says the construction of the new piers shows the commitment of the society and the working partnership the society has with Tauranga city council.

“The council owns the land which we manage under a management agreement with them. We own the marina and all of the marina is owned by the society members, 560 members.

“We had Bill Mitch here today who was a part of the 1982 original construction and he did it to have somewhere to put his boat, but also for the future people of this area.”

“You could well imagine that there’s some multimillion dollar boats at one end and with the smaller boats down at the other end there’s some $20,000 to $30,000 boats.

“But it’s not all cost and size but importance to the persons that sit on it and enjoy it.

“We’ve got to be mindful of how we can do enhance the marina and how it can continue to be of affordability to those people as well as these people. So being a society we’ve had to try and work that in a fair way.”

Eric says the construction of the site was a big undertaking by staff.

“We have a great working relationship with the iwi, with the three main marae from around the bay but it is our own staff and our contractors have put this together.

“When we did our resource consent we had the support of the local iwi and through that process we were going to do a number of things.

“We were going to put some poupou in front of the office block and another things is we offer a cadetship once a year to local iwi that want to study aqua.

“What we decided rather than just having some poupou that could just be another statue, we decided to put something over the gateway which gave the entrance culture for everyone passing through there.

“We started planning in 2018 and both gates were completed in 2020.  We hope to have G pier installed by October next year and hope to have the whole lot completed within four to five years.

“It’s a pretty good facility for the people of Tauranga who have an ambition to own a boat and then to start thinking about how they get here.

“Yes it can be a privilege to own something of this size and magnitude and most of these people here have worked hard to get what they have.”